Falling pregnant is not always as easy as it seems, as 1 in 6 couples will experience some difficulties when trying for a baby. If you are having trouble, rest assured you are not alone, Repromed is here to help.

Important Factors for a Healthy Pregnancy

To achieve a healthy pregnancy, you generally need; healthy eggs, clear fallopian tubes (ie. no blockages, so the sperm can effectively reach the egg), healthy sperm that can reach and fertilise the egg – which result in a healthy embryo that can implant into the uterus.

A female’s reproductive organs are located inside the female body and include the following:

They work together to help a female get her period (menstruate), fall pregnant (conceive) and then bring a baby to term. 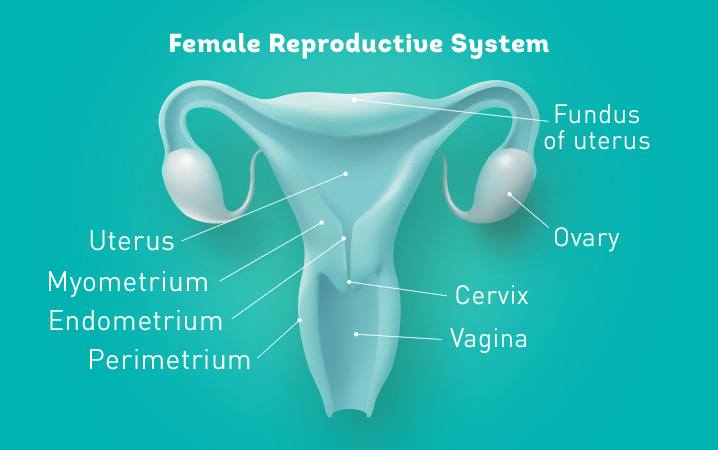 The vagina is a tube-like formation that connects a female’s internal reproductive organs with her external genitalia. The vagina is supple and stretches when giving birth.

The cervix is located between the uterus and the vagina. It releases cervical mucus that helps, or sometimes prevents, sperm from fertilising an egg. The cervix is also extremely flexible and expands during childbirth.

The uterus is also known as the womb. When an egg is released from one of the female’s ovaries, it can take a few days for it to reach the uterus. Once the egg is fertilised, it implants in the inner lining (endometrium) and develops in the uterus throughout the pregnancy.

The ovaries produce oestrogen and progesterone, these hormones are crucial for reproduction and pregnancy.

Most women will have 2 ovaries (left and right). Ovaries store egg follicles. Each month, a follicle will mature and release an egg into one of the fallopian tubes. A woman’s eggs are made before she has been born and they will start to decrease in number as she matures. A woman is born with about 2 million eggs, and by the time she has her first period, she will have about 400,000 eggs left.

Fallopian tubes connect a woman’s ovaries to her uterus. They have 20-25 finger-like formations on their ends, similar to tentacles. These tentacles live above the ovaries and they collect the egg that is released. Fertilisation of the egg happens in the fallopian tubes. If a woman’s fallopian tubes are blocked, they may struggle to fall pregnant naturally and may need assistance. 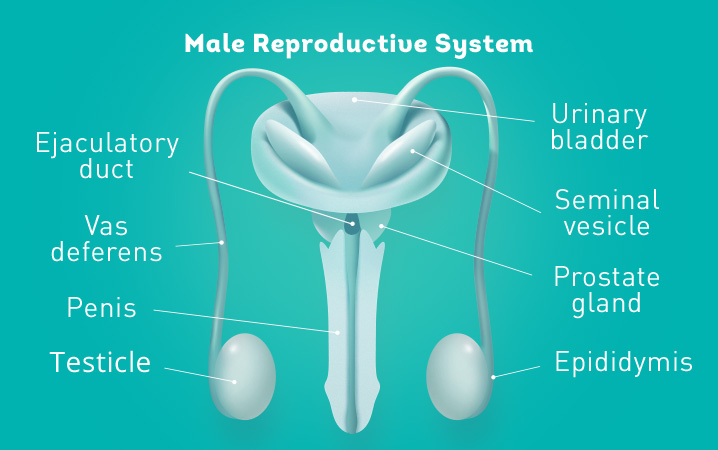 The scrotum is the sack of skin located beneath the penis and the testicles (testes) are located within the scrotum. Testicles produce testosterone which is a hormone crucial for reproduction, testicles are also responsible for producing sperm which fertilises the egg.

Once sperm is mature, it moves into the vas deferens which is the tube connecting the epididymis to the pelvic cavity.

The urethra is a tube that goes from the bottom of the bladder all the way to the end of the penis, in preparation for ejaculation, sperm moves to the urethra. When the penis is erect, urine is blocked from the urethra, so that only semen is ejaculated.

From the ovaries, an egg is released, it continues down a fallopian tube towards the uterus. As it travels, it produces a natural chemical which attracts sperm.

Men release millions of sperm when they ejaculate, however only a few hundred will make it from the cervix, up into the uterus and into the fallopian tube where the egg has been released. Only one sperm can make its way through the egg’s coating to then begin fertilisation.

The fertilised egg, now an embryo, will continue down the fallopian tube where it then implants into the inner lining of the uterus.

Ovulation is the release of a mature egg from your ovary approximately 14 days before the beginning of your period.

A woman is born with about 2 million eggs, by the time of her first period there are about 400,000 eggs left.

How to Tell When Ovulation is Occurring

Just before ovulation, your cervical mucus becomes clear and slippery, similar to an egg white. Cervical mucus helps the sperm to travel through the cervix – consider this your body’s natural way of saying it is the best time to try and get pregnant.

You may like to use ovulation predictor kits which will predict a rise in your Luteinizing Hormone. This rise will indicate you should ovulate the following day. You can start testing with the kits a few days before your estimated day of ovulation. It is recommended that is you are not pregnant after using these kits for 6 months and they have shown you have ovulated, to see your GP.

After ovulation, your cervical mucus changes again, becoming thicker with a white or yellow colouring, making it less easy for the sperm to travel through to the cervix.

Your fertile window is considered to be the 5 days before ovulation and the day of ovulation.

When is the Best Time to Conceive?

For the best chance of natural conception, it is a good idea to have intercourse at least every 2 days during your fertile window as sperm have a life span of approximately 5 days where as an egg only has a lifespan of 24 hours.

If you have irregular periods or you are not sure when you ovulate, try to have sex every 2-3 days.